3D editoris an application for three-dimensional models and animations with their participation creating.

At present, 3D-models are used widely, ranging from the creation of the cartoons to the design of buildings and vehicles. Just want to warn you that the three-dimensional modeling is a complex process and if you think that having no experience in 10 minutes you will make your first 3D-animation, the more likely you'll be disappointed. Start with a simple, if you'll be patient and study some of the teaching materials, you will learn how to create something that is not ashamed to show to your friends :)

It's not big, but quite powerful 3D-models editor. It allows to create 3D animated scenes, video and even interactive games.

We have a set of all main instruments used in the professional 3D editors. Such as: 3D modeling, animation, rendering and video editing facilities, game engine, visual 3D effects etc. There is also an ability of additional plugins connections — both official and users'. The interface is object-oriented. The editor has a strict structure (it is required to assign all characteristics and detailed define attributes of the objects for each scene creation). 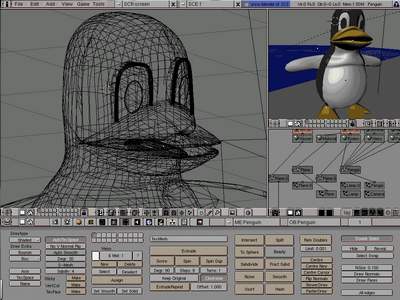