MP3 Files Editor is an application for quick editing of the ready audio files in an mp3 format.

Such applications are quite limited with their functions because of their narrow speciality to help us quickly correct a redy audio record without a further recoding. E.g. when we need to cut off a silence in the beggining or in the ending of a track, to normalize a sound level or to create a fading of the ending, in all these cases it would be sufficient such features mp3-editor.

A small audio editor for the MP3-files direct editing (without deciding). It excludes the quality losses and spares our time. It helps to delete the silence, to normalize or fluently reduce the sound, to combine some files, to edit the ID3-tags and burn MP3 discs without the decompression to PCM-format (ACM and LAME-codecs are supported). It can work with the large files. 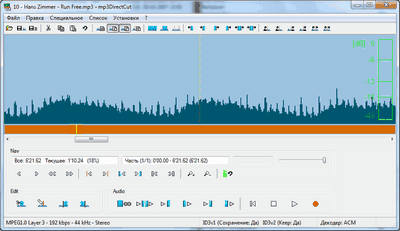