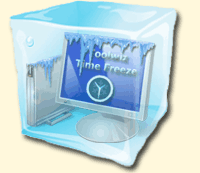 System snapshot is a function that allows in any way to record a current system settings and files on system disk. The record may be full (a fully Disk C copy) and we call it system image or parted, where only several changes between the previous snapshots are fixed (e.g. Windows restore points).

With the system snapshot we can restore Windows after the virus attack which corrupted a normal computer's work. However, we don't always do backups. Yes, and eventually the system accumulates a large number of different errors that even without the assistance of viruses, solidly inhibit daily work at the computer.

So it were developed some special applications that allow you to regularly create system snapshots and restore your computer to its previous state after each reboot! It looks as the system freezing at the stage when it was installed the automatic backups creation solution. Below you will find one of the free programs for your PC "freezing" Toolwiz Time Freeze.

An application for your system and whole the system drive snapshot creation in order to preserve it from changing during subsequent reboots. Thus the system as would be "frozen" and does not malicious applications violate its integrity!