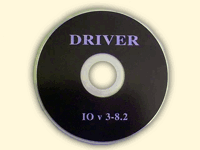 Drivers are a special software type for the correct and optimal co-working of all the computer components providing. In another words with the help of drivers different computer system nodes can "speak" to one another translating and receiving data for the further processing.

Drivers can be standard (usually provided with the operation system) and special. The first ones provide only a basic level of interaction (for example, a standard video driver allows you to display the image on the screen in a low resolution), and the second are written by developers for the specific hardware model and allow to use the full potential of the device.

Specialized drivers typically come bundled with hardware component on a separate disk or Flash drive. They can also be downloaded from the official site of the developer company. However, we often need to set up more than one driver, and the whole set (for example, after a system reinstallation). To not do this manually there are special utilities for downloading and installing the drivers. One of them is DriverHub, which we'll tell you below.

A small utility which allows to automate tasks of downloading, installing and updating drivers on your computer.