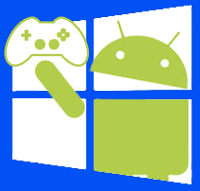 Android Emulator – a software for Windows which implements Android system functional and allows to run apps and games for it in an isolated environment.

Modern Android emulators allow you to not only implement full support for mobile systems on the computer, but also to simulate most of the functions of real handheld devices. For example, it can emulate the camera (if you have a Web camera on a PC), position transducer device or touch screen. The advance of the most emulators is the support of the binding of the most functions to pressing certain keyboard keys, that makes it easier, for example, to control the games.

There is an Android 4.4.2 (KitKat) emulator Nox App Player which has all the above advantages on the page below.

A good free Android emulator which allows to run APK-apps and play mobile games on a Windows computer.

Android emulator: Windroye Free Android emulator for games and apps playing on PC.
Sega Emulator: Gens A Software emulator of the popular in the 90 years video game consoles of Sega company . It allows you to run most of the old games as well as a real console. Also the emulator has a number of improvements, which were not even in the classic console, simplifying the process of passing and diversify of almost any game.
Virtual Machine: VirtualBox An application that emulates different operation systems on the base of the Windows.
Linux Emulator: KDE for Windows Installer A free software emulator of the Linux operation system for your Windows.
LiveCD Emulator: MobaLiveCD A free software LiveCD emulator which allows to run an additional operating system directly to the PC's RAM without a beforehand installation.